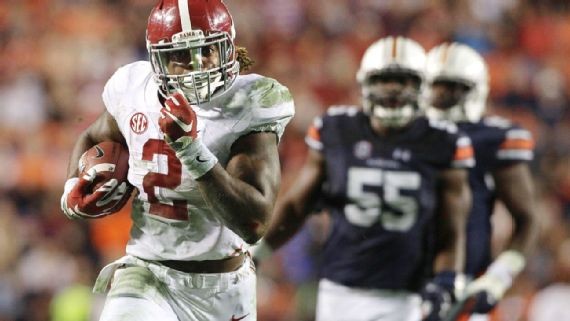 About the Award: This is the 12th year that the Walter Camp Football Foundation will honor one offensive and one defensive player as its national Football Bowl Subdivision player of the week during the regular season. Recipients are selected by a panel of national media members and administered by the Foundation.

OFFENSIVE PLAYER OF THE WEEK

Derrick Henry rushed for 271 yards and one touchdown on a school-record 46 carries to lead second-ranked Alabama (11-1, 7-1 in SEC) to a 29-13 victory over Auburn. Now the school’s season rushing record holder, Henry rushed for 114 yards in the final quarter as the Crimson Tide qualified for next weekend’s SEC championship game.

Notes: Derrick Henry is the 11th Alabama player to earn Walter Camp National Player of the Week honors since 2004, and the second this season (defensive back Minkah Fitzpatrick, Oct. 18).

DEFENSIVE PLAYER OF THE WEEK

Notes: Ty Summers is the eighth TCU player to earn Walter Camp National Player of the Week honors since 2004, and the second this season (WR Josh Doctson, Sept. 27).

Generation UCAN (@GenUCAN) is healthy sports nutrition powered by a unique, slow-burning carbohydrate called SuperStarch. UCAN’s drink mix provides steady energy, allows you to burn more fat for fuel during workouts, and helps you recover efficiently compared to sugary sports drinks or a high carbohydrate meal. UCAN contains no added sugars, no caffeine, and is gluten-free. SuperStarch was originally designed to help children who suffer from serious energy imbalances and now fuels some of the top athletes in the world – ranging from professional football players, to Olympic runners, to everyday athletes striving for fitness. The UCAN Company is based Woodbridge, CT. Visit www.generationucan.com for more information.

Walter Camp, “The Father of American football,” first selected an All-America team in 1889. Camp – a former Yale University athlete and football coach – is also credited with developing play from scrimmage, set plays, the numerical assessment of goals and tries and the restriction of play to eleven men per side. The Walter Camp Football Foundation (www.waltercamp.org,@WalterCampFF) – a New Haven-based all-volunteer group – was founded in 1967 to perpetuate the ideals of Camp and to continue the tradition of selecting annually an All-America team.  The Foundation is a member of the National College Football Awards Association (NCFAA). The NCFAA was founded in 1997 as a coalition of the major collegiate football awards to protect, preserve and enhance the integrity, influence and prestige of the game’s predominant awards. The NCFAA encourages professionalism and the highest standards for the administration of its member awards and the selection of their candidates and recipients. For more information, visit the association’s website, www.ncfaa.org

Want to join the discussion?
Feel free to contribute!