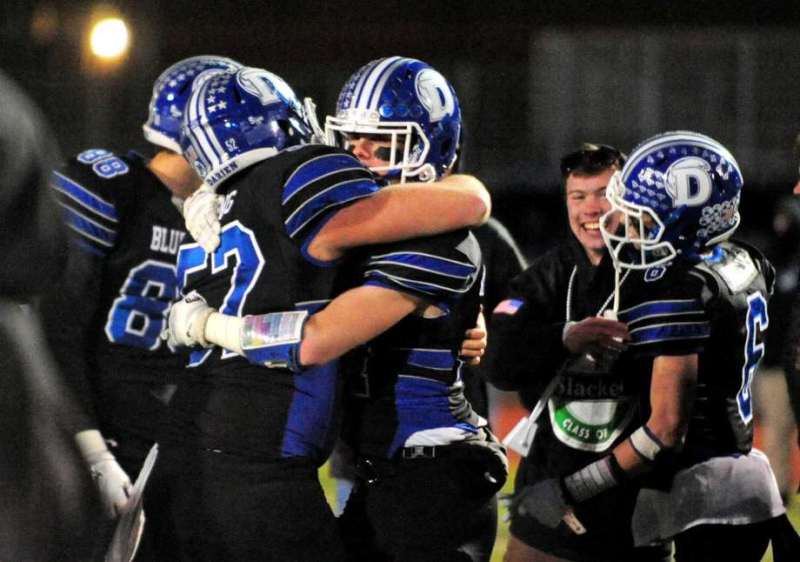 It is the second straight year Darien has earned the honor, and the first to repeat since Xavier (2010 and 2011).

“With its potent offensive attack along with a stingy defense, Darien was outstanding on its way to another perfect season,” said Walter Camp Football Foundation President Robert Kauffman.  “We salute Coach Rob Trifone, his staff and players on a phenomenal season.”

The Blue Wave then defeated Greenwich, 29-3, in the Class LL quarterfinals on November 29.  In the semifinals, Darien defeated Southington, 38-7, and culminated its 13-0 perfect season with a 28-7 victory over Ridgefield in the championship game on December 10.   In its 13 games, the Blue Wave averaged 40.4 points per game, allowing just 13.6.

Coach Trifone and the Darien team will be recognized at the organization’s High School Breakfast of Champions event, on Saturday, January 14 at the Omni New Haven Hotel. Darien, along with the three other state football champions (New Canaan, Hillhouse and Ansonia) will be feted.  Also that morning, the Walter Camp All-Connecticut Team, High School Player and Coach of the Year will also be recognized.

Later that evening, members of the 2016 Walter Camp All-America team, including Player of the Year Lamar Jackson (Louisville) and other major award winners (Alumni Award-Orlando Pace; Man of the Year-Warrick Dunn; Distinguished American-Mike Ditka), will be honored at the organization’s national awards banquet, presented by KeyBank, at the Yale University Commons in New Haven.

Walter Camp, “The Father of American football,” first selected an All-America team in 1889. Camp – a former Yale University athlete and football coach – is also credited with developing play from scrimmage, set plays, the numerical assessment of goals and tries and the restriction of play to eleven men per side. The Walter Camp Football Foundation – a New Haven-based all-volunteer group – was founded in 1967 to perpetuate the ideals of Camp and to continue the tradition of selecting annually an All-America team.  Visit www.waltercamp.org for more information.