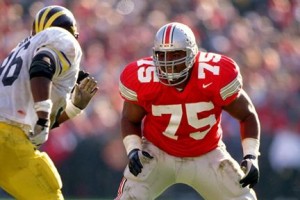 The Walter Camp “Alumni of the Year” award is bestowed on a worthy individual who has distinguished himself in the pursuit of excellence as an athlete, in his personal career and in doing good works for others.  He must be an individual who has exhibited dedication and good moral conduct in achieving success. He must be a compassionate and unselfish person who contributes his time and assistance in helping to encourage and comfort fellow human beings less talented and less fortunate than himself.  He must be an individual who takes pride in having been a Walter Camp All-American.

“We are delighted to recognize Orlando Pace with the Walter Camp Alumni Award,” Foundation president Robert Kauffman said. “He was one of the most dominant offensive linemen in the history of collegiate and professional football.”

Raised in Sandusky, Ohio, Pace was a Parade All-American for the Sandusky High School football program and then attended The Ohio State University, where he was a four-year starter at offensive tackle and a two-time Walter Camp All American.   He won the Outland Trophy (best interior lineman) in 1996 and was a two-time recipient of the Lombardi Award (best college lineman/linebacker).   He was a finalist for the 1996 Heisman Trophy, finishing fourth in the voting.

Pace did not allow a quarterback sack during his final two collegiate seasons.  Pace’s play on the offensive line was so dominant – the term “pancake block” gained popularity during his time at Ohio State.

Selected first overall in the 1997 NFL Draft by the St. Louis Rams, Pace was an immediate professional success – starting as a rookie.  In 1999, he earned his first Pro Bowl berth and was named First Team All-Pro as the Rams won Super Bowl XXXIV.

A model of consistency, Pace started all 16 regular-season games eight times during his professional career and was the cornerstone of the Rams’ offensive line.  He was a five-time All-Pro and seven-time Pro Bowl selection.  He was named to the NFL 2000s All-Decade Team. A member of the College Football Hall of Fame, Pace was enshrined into the Pro Football Hall of Fame in the summer of 2016.

Involved in several business and philanthropic activities, Pace currently resides in St. Louis with his wife and four children.

Pace, along with the 127th annual Walter Camp All-America team and other award winners, will be honored at the organization’s 50th national awards banquet on Saturday, January 14, 2017, at the Yale University Commons in New Haven.   For more information, visit www.waltercamp.org

Walter Camp, “The Father of American Football,” first selected an All-America team in 1889. Camp – a former Yale University athlete and football coach – is also credited with developing play from scrimmage, set plays, the numerical assessment of goals and tries and the restriction of play to eleven men per side. The Walter Camp Football Foundation – a New Haven based all-volunteer group – was founded in 1967 to perpetuate the ideals of Camp and to continue the tradition of selecting annually an All-America team.